When the English Royal Society of Scientific Research and Global Exploration announces a new award to honor breakthroughs in science, turn-of-the-century inventor and world explorer, Thaddeaus Shockpocket, sets out to win the Victoria Medal by proving the existence of the Loch Ness Monster. What starts out as a simple task (after all, Thaddeaus and his twelve year old daughter Tweak spotted Nesse just one year prior when the serpent ate Tweak’s peanut butter and sardine sandwich crusts) turns into a calamitous chain of events involving monsters, family mysteries, shady characters, and more of Thaddeaus’ unique inventions including a miss-firing Chemo Electric Plasma Elephant Stun Gun.

So, put on a pot of tea, open a tin of biscuits, and begin reading. Just be careful not to snort any tea out your nose as you laugh at the latest miss-adventures of Thaddeaus Shockpocket. 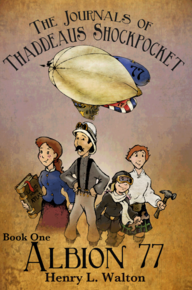 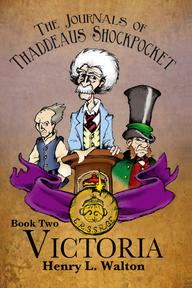 ​ Turn of the century English inventor and explorer Thaddeaus Shockpocket is having another bad day. It  seems like only yesterday his ten year old son Sherlock was carried off into the Amazon jungle by local natives after Thaddeaus accidentally presented the boy as a gift to the village chief. And now it is happening again.  He stands helplessly watching as his wife Katherine disappears into the sky in the family airship ALBION 77 after he accidentally pumped too much helium into the balloon.
Another Shockpocket has been lost in the pursuit of science and one thought bursts into Thaddeaus’ head, pushing out all others as he watches the pinpoint balloon vanish into the distance.
‘It’s four o’clock. I hope Tweak put the kettle on. I need a nice cup of tea.’
And then a second thought. ‘We really must go and find Sherlock”
And then a third. ‘I hope Katherine lands.  Soon.  And somewhere nice.  What an adventure she will have.  If only she doesn’t crash first’.

Yes, it is just another day in the Shockpocket family.  But this day leads to unexpected discovery and adventure as Thaddeaus and his twelve year old daughter Tweak wait for word from Katherine, invent several new devices to change the world, and search for Sherlock in the deepest, darkest corners of Brazil.